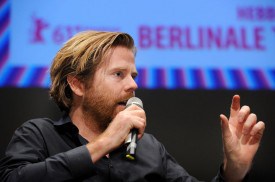 EXCLUSIVE: London-set action thriller Blowback is moving forward with Armadillo helmer Janus Metz in the director’s chair. Penned by Gregory Burke, writer of the hot Berlin Competition pic ’71, the film will shoot this summer. The story follows a team of soldiers who return to London from Afghanistan and are drawn into crime on a major scale. But all is not what it seems as they encounter one deception and double-cross after another. Casting is underway with what I’m told will be high-level British talent.

© Peter Himsel_ Berlinale 2011Metz won the top prize in Cannes’ Critics’ Week in 2010 with war documentary Armadillo, and Burke’s 71 is a wartime drama; Blowback teams them on familiar ground. The UK’s Shine Pictures and LA’s Fields Entertainment have boarded in association with American Entertainment Investors. The film is fully financed and Protagonist Pictures is handling international sales. Blowback will be produced by Ollie Madden and Simon Fields, with Stephen Garrett and Joseph Cohen exec producing. Shine’s Madden says, “We’re thrilled to be moving forward with this project, which as well as being a gripping, entertaining thriller also feels very timely. Janus is a huge talent with an obvious affinity for the material, and Greg Burke is one of the very best writers in this space.” The news comes a couple of weeks after the sought after Metz was attached to helm the adaptation of the Nic Pizzolatto novel Galveston starring Matthias Schoenaerts. Metz is repped by CAA and Cinetic Media. Burke is with Lisa Foster and Alan Brodie and UTA.