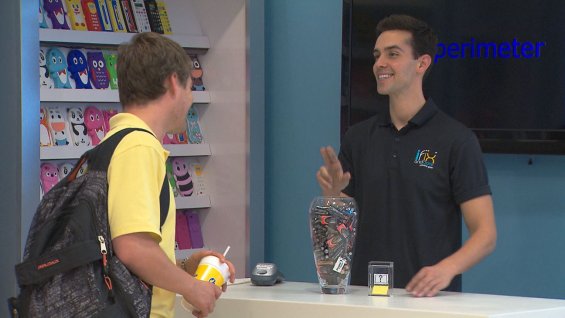 Undercover Magic (working title), a 12-episode unscripted series featuring comedian-magician Michael Carbonaro, will premiere on the Turner-owned cable network in summer 2014, it was announced Wednesday.
In the series, Carbonaro performs tricks on unsuspecting people in everyday situations, all caught on hidden camera. Posing as an ordinary bartender or salesman, Carbonaro turns hair into a puppy and pours 12 pints of beer from a regular bottle. In the announcement, truTV unveiled a preview. (Watch below.)
“What we love about Michael Carbonaro’s approach to magic is that in addition to great illusions, he has a unique ability to connect with the marks and keep them engaged comedically without being snarky,” said Chris Linn, president and head of programming at truTV. “And Michael does this in such a charming, fun way that, as a viewer, you actually wish you were the mark. Undercover Magic is shaping up to be a lot of fun, and we are very excited to be rolling out this new series early next summer.”
Undercover Magic is produced by Fields Entertainment and 11 Television. Simon Fields and Kevin Healey are executive producers.
The series is the latest unscripted effort greenlighted by truTV, which has properties such as Killer Karaoke, Guinness World Records Unleashed, Panic Button and Impractical Jokers.