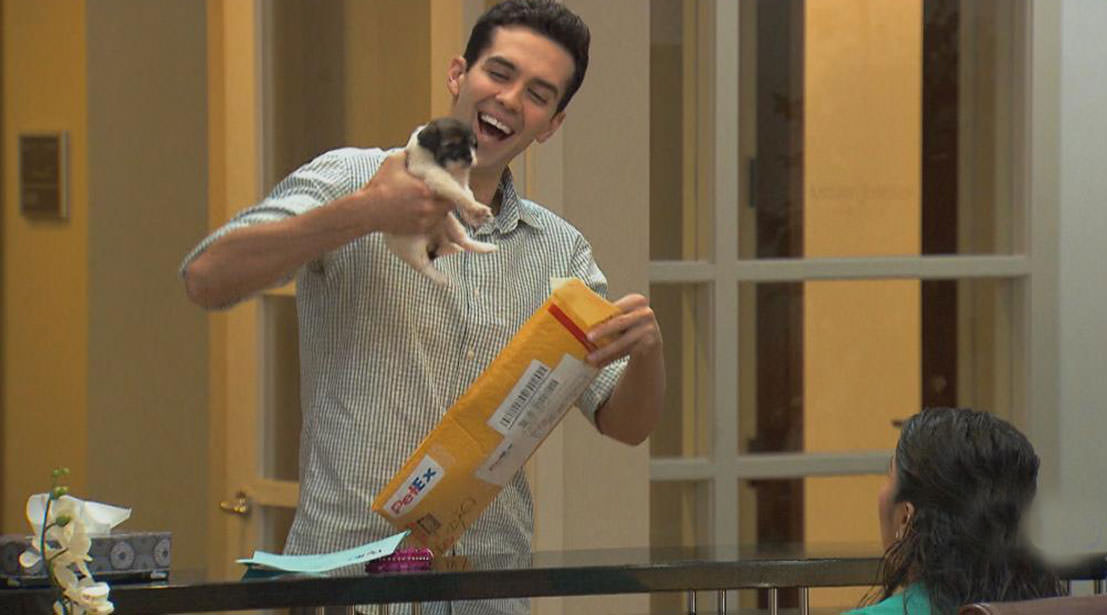 Following an extensive rebrand that began in 2014, truTV has seen consistent ratings growth in both prime and total day among adults 18-34 and adults 18-49, along with audiences that are younger (median age of 36) and more affluent. The network also delivered more than 3 billion social impressions in 2016, and recorded its best month ever with more than 94 million total video views across its social and digital platforms in January 2017 alone.

“Three years ago, when we announced our plan to totally reinvent truTV as a comedy network, people thought we were nuts and it would never work – but at least they were nice about it,” said Chris Linn, president of truTV. “Now, when we look at the quality and diversity in our programming slate and the talent we’re bringing to our network – not to mention the strong momentum and high engagement we’re building among our fans – we are incredibly proud of the work that’s been done and how far we’ve come in a short time. Not only have we completely changed the programming slate, but truTV has evolved into a distinct brand that appeals not only to a higher level of talent, but also to more premium audiences and advertisers.”

At Home with Amy Sedaris – 10 Episodes – Series Premieres in Fall 2017
Comedy icon Amy Sedaris applies her sincere yet distinctive brand of silliness to this one-of-a-kind mash up of hospitality, variety, and talk show formats. Through her imaginative characters and unique point of view, the series will showcase Sedaris’ diverse but necessary homemaking skills, tackling important topics like gift giving, cooking for one, making love, entertaining for peanuts, and murder-cide, among others. Each episode will fuse Sedaris’ humor and talents as a crafter, chef, baker, and hostess. truTV has ordered 10 half-hour episodes of the series, which goes into production this summer. The series is produced by PFFR with Sedaris, Paul Dinello, Alyson Levy, John Lee, and Vernon Chatman executive producing.

Bobcat Goldthwait’s Misfits & Monsters – 8 Episodes – Series Premieres in Early 2018
This genre-hopping, scripted anthology comedy series will bring viewers twisted morality tales from the darkly witty mind of creator and four-time Sundance Award-winning writer and director Bobcat Goldthwait. Each episode will tell a different story in a different genre – including 1970s-era science fiction, psychological thriller, romantic comedy, and reality – and will satirize our social norms and exploit the awkwardness of its flawed characters. The series, which goes into production this summer, is produced by Left/Right with Goldthwait, Banks Tarver, Ken Druckerman, and Olivia Wingate serving as executive producers.

The Chris Gethard Show – 16 Episodes – Live Series Premieres on Wednesday, August 2 at 11pm ET
This summer, The Chris Gethard Show makes the jump to truTV and, for the first time on national cable – and a first for truTV – it will be broadcast live. In this hour-long call-in talk show, Gethard attempts to ring-lead a panel of comedian friends and oddballs, along with a live studio audience, who participate in games, tackle bizarre stunts, and react to the controlled chaos around them. It’s a totally immersive, interactive experience for all. The series, which will broadcast live from New York City, will premiere on truTV Wednesday, August 2 at 11pm ET. It is produced by Funny Or Die with Zach Galifianakis, Will Ferrell, Adam McKay, Owen Burke, Chris Gethard, JD Amato, Anna Wenger, and AGI Entertainment Media & Management’s Brian Stern serving as executive producers.

Adam Ruins Everything – 16 Episodes – Season Two Premieres on Tuesday, July 11 at 10pm ET/PT
Adam Conover embarks on a comically inventive and relentlessly factual quest to reveal the hidden truths about everything we know and love. Tackling a broad range of topics, Adam delivers both fun facts and compelling information, encouraging viewers to see the world in a whole new way. Throughout the course of the second season which debuts July 11th at 10pm ET/PT, Adam will apply his lens to topics including childbirth, weight loss, the economy, the suburbs, hospitals, science, conspiracy theories, wellness, and things we learned in school. Created by Conover, the series is produced by Big Breakfast with Conover, Sam Reich, Spencer Griffin, Jon Cohen, and Jon Wolf serving as executive producers.

Comedy Knockout – 16 Episodes – Season Two Mid-Season Premiere on Thursday, May 18 at 11pm ET/PT
Comedy Knockout pits comedians against each other in a series of fast-paced challenges. In each episode, host Damien Lemon (Guy Code) sends three comics into a battle of high stakes comedic gameplay. The comedians throw roast-like, rapid-fire jabs at their opponents, and each show ends with one comedian crowned champion, one eliminated, and one forced to face the crowd to apologize for going down in shameful defeat. 16 new half-hour episodes of the series, which is produced by Embassy Row and 3 Arts Entertainment, will return to truTV with the series’ season two mid-season premiere on Thursday, May 18 at 11pm ET/PT. Michael Davies, Amanda McPhillips, Julia Cassidy, Mo Mandel, Tim Fornara, Josh Lieberman, and Greg Walter serve as executive producers with the series concept by Mo Mandel.

Hack My Life – 10 Episodes – Additional Episodes for Season Three Premiere in Fall 2017
In Hack My Life, hosts Kevin Pereira and Brooke Van Poppelen provide comedic step-by-step instructions for eye-popping shortcuts and cheats guaranteed to save today’s busy adults a lot of time, effort, and money. Produced by Truly Original with Glenda Hersh, Steven Weinstock, and Todd Hurvitz serving as executive producers, the series has been ordered for additional episodes of its third season, which are set to debut this fall.

Impractical Jokers — 26 Episodes – Season Seven Premieres in 2018; Season Six Mid-Season Premiere on Thursday, July 13 at 10:00pm ET/PT
truTV announced today the greenlight of the seventh season of Impractical Jokers, the network’s longest-running, smash hit original series. This new 26-episode order will debut in 2018, bringing television viewers more hidden-camera hijinks from lifelong friends Sal, Joe, Murr and Q – collectively known as The Tenderloins. The series has been a monster hit throughout its run, with its most recent episodes from the current sixth season averaging more than 1.7 million total viewers and 1.2 million adults 18-49, making it the #1 cable series in its timeslot with adults 18-34. New episodes will return on Thursday, July 13 at 10:00pm ET/PT with a special hour-long mid-season premiere episode that features the Jokers on location in Hawaii. Impractical Jokers is produced by NorthSouth Productions with Charlie DeBevoise, Pete McPartland Jr., Joe Gatto, James Murray, Brian Quinn, and Sal Vulcano serving as executive producers.

Jon Glaser Loves Gear – 10 Episodes – Season Two Premieres in 2018
Actor and comedian Jon Glaser (Trainwreck, Parks and Recreation, Girls) still loves gear – and truTV has ordered a second season of the comedy series. Season two picks up where season one left off, as Jon conquered his demons and unraveled the meaning of what gear truly meant to him. Thankfully there’s an endless amount of new gear out there for Jon to love, all while being supported by his real family, his fake family, his phone, and his ‘Spurt. The series is produced by PFFR with Vernon Chatman, John Lee, and Alyson Levy executive producing alongside Glaser, Dave Becky, Richard Korson, and David Miner.

The Carbonaro Effect – 16 Episodes – Season Four Premieres in 2018
Magician by trade but prankster at heart, Michael Carbonaro performs ingenious tricks on unsuspecting people, all caught on hidden camera. Whether posing as a coffee shop barista, museum curator or seemingly unremarkable store clerk, Michael’s effect on people leaves you laughing out loud with his bewildering and thrilling illusions. The series is produced by Fields Entertainment with Simon Fields and Michael Carbonaro serving as executive producers.

Those Who Can’t – 13 Episodes – Season Three Premieres in Fall 2017
This fall, truTV’s first scripted series Those Who Can’t returns for a third season that is more unhinged and hilarious than the last. Denver-based comedy troupe The Grawlix (Adam Cayton-Holland, Andrew Orvedahl and Ben Roy) return as three trouble-making teachers who, joined by librarian Maria Thayer, are more inept than the kids they teach and are out to beat the system as they struggle to survive each day on their own terms. The series is executive-produced by Tracey Baird and Krysia Plonka of Thank You, Brain! Productions; Michael Rotenberg and Josh Lieberman of 3 Arts Entertainment; Richard Korson; and Andrew Weinberg, who also serves as the series’ show runner.

You Can Do Better –13 Episodes – New Episodes from Season Premiere on Tuesday, July 11 at 10:30pm ET/PT
Hosts Matthew Latkiewicz and Abbi Crutchfield dole out all those real-life skills you’re expected to know but no one ever taught you. In this batch of all-new episodes, Matt and Abbi will explore a range of topics from gambling and pets to weddings and dealing with your sh*t. The series is produced by Redtail Media with Chris Burke, Jared Cotton, and Brian Dickett serving as executive producers.

Untitled Austin Martinez Comedy (wt) – Scripted Pilot
Molly Austin and Shamikah Martinez – also known as Austin Martinez – star in this scripted comedy pilot in which episodes spark from relatable conflicts and milestones of being an official adult – things like being the one in charge of an actual emergency, babysitting your friend’s kid, and getting your first grown ass woman couch. These relatable, everyday situations are taken to into an absurd magical world that includes everything from music videos and sketches to talking cats and noir mysteries. The project is produced by MAD pictures with Adam Donald, Martinez, and Austin serving as executive producers.

End Times Girls Club (wt) – Pilot
End Times Girls Club is your ultimate guide to apocalypse survival. Driven by her personal paranoia, Rose – played by creator and writer Rose Schlossberg – is here to educate girls on how to prepare for the end of the world and stay cute in the process! The hybrid comedy series is produced by Broadway Video with Schlossberg, Stoney Sharp, and Andrew Singer serving as executive producers.

False Advertising (wt) – Presentation
Known for their terrifyingly believable commercials, The Kloons bring competition (and their marketing genius) to a whole new level in this half-hour show. The comedy group pits two hilarious ideas against each other, creating real commercials (of totally fake products) to convince an unsuspecting focus group. Will they believe that Cheez-Its Christ is really being sold on the shelves of supermarkets, or that a Prada body bag is the hot new fashion item of the year? Absurdity ensues as The Kloons attempt see which product the focus group finds more believable, and which goes too far. The project is produced by Studio 71 with Rabih Gholam, Tally Barr, Mitch Lewis, Greg Washburn, and Nick Kazoura serving as executive producers.